I’ve got a machine! 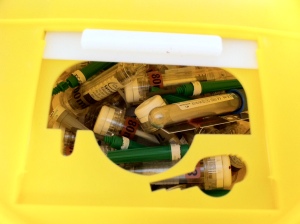 For the past 2 months, I’ve been stabbed about twice a week as the thickness of my blood is checked. Luckily, I have a yellow bucket . The yellow bucket is my disposal unit for all the discarded jabs and containers which have been used by my vampirical bloodthirsty wife as she pierces my skin while I snooze in the early morning. Far be it from me to suggest she enjoys this, but I swear I heard a cackle as she left me in a pool of blood one rainy Friday last month.

The treatment for the clot is a medicine called warfarin. You’ll probably have heard of it, as over 1.25 million people in the UK are dependent on warfarin as an anti-coagulant. It thins your blood and reduces the likelihood of another clot forming. It does not disperse the current clot however, and as it’s dangerous to let your blood get too thin, you need to regularly provide samples which detect your INR, which as well as being the international code for the Indian rupee,  means “international normalised ratio”. A normal reading is “1.0”, but I need to keep my INR between 2-3, which means my blood will be two or three times as thin as yours. Any higher, and you put yourself at risk of internal haemorrage, or bleeding from the brain.

Well look at that baby. The hospital has lent me one of those, and it’s great. I insert a small strip, and then use some sort of jabbing object to create a drop of blood which I drip onto the strip for analysis. An electronic egg timer works away on screen until your INR reading is displayed and the machine bleeps. It bleeps, I tell you! Who could want for anything more?

A lot of people have misconceptions about warfarin – “Rat poison!”, they squeal. And it’s true, it was once used to kill rats, but this is becoming less common now. But how did they find this out? Who discovered warfarin? Well in the early 1920s, a lot of Canadian cattle started bleeding to death at the simplest operation, like having their horns ripped off, or being castrated. It turned out that these bulls and cows had been eating rotten clover leaves. Then, when a load of boffins analysed the clover, they were able to extract the element which had thinned the blood of the cattle – and that became warfarin as we know it today.

As I’ve had clots on two seperate occasions, I am automatically advised to take warfarin for life. Initially, this wasn’t an issue for me – my main concern was that I wouldn’t be able to get a bit drunk once in a while. But after two months, I am now starting to suspect that there are side effects which lead me to consider alternatives. I am often dizzy – a sort of a feeling of vertigo – I get tired suddenly at different times of the day, and I think it might even be affecting my memory, though I can’t remember if my memory was any good before I started taking it. I am constantly cold and have taken to wearing three coats to football matches. I decided to have a discussion with my consultant about the options.

Basically, under my current treatment I am 2% likely to have another clot. If I come off warfarin, that likelihood increases to 10%. I have been able to manipulate the figures however, and have created the following scenario:

If I come off warfarin, I am 10% likely to have another clot. If I lose weight and remain active, that likelihood is reduced to about 6% (according to my consultant). If I do then get another clot, it is 50% likely to occur in my leg, which is treatable. And even if the next clot occurs in my lungs, I still have a 60% chance of survival, which by my reckoning means that with a fair wind, and in the right circumstances, my chances of survival after coming off warfarin are about 99%. That’s less dangerous than crossing a busy road on a sit-down tractor. I’m tempted.

Unfortunately, I’ve been experiencing other side effects which are not so easily dismissed. I still get occasional reminders from my lungs that all is not well. Nothing serious, just jabs, twinges and dull aches, which are a result of scarring caused by the clots. After 6 months if these pains remain, they will never go away. There is also occasional breathlessness – the clots are still there and are probably impeding oxygen supply to my blood. (Forgive me if I sound like I know what I’m talking about – I’m bluffing my way through this – remember my memory is wrecked).

At least I’ve now got a date (June 1st) for the MRI scan on my knees. Just eighteen months after I reported the problem to my GP, I am set for a final diagnosis to confirm torn cartilage. It will then be some time before surgery can repair that, and I can start training for the Alps. It will be next Autumn before I can assess whether my lung capacity has been reduced, and whether I will suffer discomfort from the clot scarring. That may be a bigger barrier to achieving my goals than I’d envisaged.

I suspect the biggest barrier of all may be my paranoia. After two days of library research in Cardiff this week, I began to feel a sudden and unexplained bruising just below my left buttock. As it spread to my thigh overnight, I woke up alone at 3am in a clammy sweat, semi-panicking about the possibilities. Instead of returning to the library I drove straight up to the hospital in Bangor where a clot was thankfully ruled out. It may possibly have been a bout of sciatica caused by sitting on my phone, but it was definitely a pain in the arse.

47-year old Welsh cyclist. I suffered a dual pulmonary embolism in March 2011, following an attack of transverse myelinitis in 1994. Apart from that, I'm fine. Author of Red Dragons: The Story of Welsh Football.
View all posts by 2clots →
This entry was posted in Uncategorized. Bookmark the permalink.