It’s been a very long time since I updated this blog, and there’s a good reason for that. Mainly, just over a year after I started writing this thing, I’m still not able to go back and read those first posts from my hospital bed. It now feels like somebody else wrote them – it feels like they were written in a different era, by a different personality, and I’m pretty acutely embarrassed about baring my soul like that. Nonetheless, I think that maybe everybody should go through some form of life-threatening illness to gain some perspective on the important things in their life. 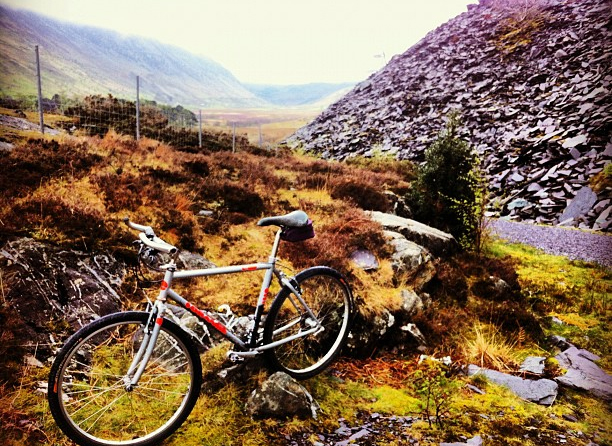 I downloaded the Weight Watchers app for the iphone, and used that to control my diet while I also began training for the holy grail of the Alpe D’Huez. The app allows you to input your food consumption and it calculates the amount of weight watcher points you use. It calculates and provides you with a daily points limit to enable you to lose weight safely. (You’d be surprised at some of the points totals – a pint of lager is 7 points from my intitial daily allowance of 50 – not bad eh?) 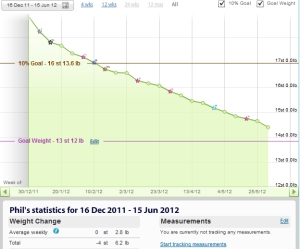 My weekly routine has been to weigh on Friday mornings, relax with a few glasses of wine on Friday evening, and eat out and sink some beers on Saturday nights. The rest of the week I ususally eat porridge, salad, ratatouille, tuna, chicken, and fresh veg. I also eat tortilla wraps and pitta breads instead of normal loaves. So from my startpoint of 19 stone, I’m now about 14 stone 5lbs, which is the same weight I was in college about 25 years ago.

And then there’s the cycling. I started off in January on the exercise bike in front of the whole six series of ‘The Wire’ –watching an episode a night. At first I couldn’t manage more than 20 minutes without feeling pain from my knees. But my physio friend Becky insisted I was using my knee problems as an excuse and that it would get better, so I perservered.

Before too long I was out on the mountain bike. I started off cycling around the lanes near my house. The first rides were six miles long, then ten. By March, I felt ready to tackle Nant-y-Garth, a steepish hill about a mile long. It went fine – I was gasping and panting, but I managed it, only to feel sharp and consistents jabs of pain in my chest for days afterwards.

This was a bit scary, as I knew that the blood clots had damaged my heart, and I immediately went to the GP and was sent for an ECG. Thankfully, no damage was shown, but it was felt that I should have a stress test. This took several weeks to come through, so in the meantime I bought a heart rate monitor and began training safely with slow and easy rides. A meeting with my thrombosis nurse then put me a bit more at ease – the pains I felt were more likely to be scarring from the clots as I increased my lung fitness – and so I started training more seriously again. I had the stress test on my heart and passed with flying colours – my heart is in perfect working order.

I felt born again – like I’d been given a second chance. I took to the bike with the enthusiasm of an annoying evangelist. As I dropped to sixteen stone, I took my road bike out of the shed, cleaned it and fell back in love with it.  I rode it every day, before work, during my lunch hour or after work. In April I rode the 6 miles to Llanberis to assess the road over Snowdon, which has always seemed to unreachable. An hour later, I found myself elated at the top of Pen-y-Pass wanting to tell everyone about my achievement. I’d completed the second of my targets and the best thing was that my knees didn’t really hurt. In that one ride, Alpe D’Huez became scarily possible. I’ll be honest with you – when I started writing this, I chose Alpe D’Huez because I thought it was an unattainable ambition. But now I suddenly felt under pressure to actually do the bloody thing.

I’ve never been someone who believed in the idea of gaining inspiration from someone else’s achievements. In fact, it’s usually been the opposite for me. And I remember last year when the Welsh runner Lowri Morgan was completing her super-marathon runs that I avoided her television programmes. I didn’t want to see somebody else being smug about their sacrifices and their success, when old lard-arse here sat shamefully with his feet up drinking wine and eating chocolates.

View across Anglesey from Ceunant in the Eryri foothills.

But when the series, called ‘Ras yn erbyn Amser’ (Race aganst time) was repeated in this spring, I switched it on. And I was blown away. Somehow Lowri managed to convey the feeling of physical training as it really was – tough, gruelling, sore, boring, and bloody uncomfortable for hours on end. She was humble, not smug, and I was genuinely moved in a way that I’d never been by another athlete. She had a twitter account, so I sent her a quick message of appreciation. To my surprise she replied with support and advice. I admit that I was inspired by her words, and as I trained and ached around the foothills of Snowdonia they often rang clear in my head. ‘Pain is temporary, success is permanent’. If it hurt – so what?

Another milestone was reached last month when we spent a weekend in Tenby. I popped into a High Street clothes shop one afternoon and tried on a pair of 36” jeans. I couldn’t believe it when they comfortably fitted me – I just can’t remember the last time I wore size 36”. This opened a whole new world for me. Of course, I bought the jeans immediately in case they were the only pair of 36″ jeans in the whole world that would fit me. No more High and Mighty – I’m now on my second ebay wardrobe clearance and am replacing the new clothes I bought after the initial weight loss in March.

This High and Mighty shirt was sold on ebay for £1.64. Hard to believe it fitted me 5 months ago.

I’ve become addicted. The ten mile rides became thirty, and that Pen-y-Pass climb became a regular training route. No hill in the area now holds any fear for me, and I attack climbs with glee that I used to approach in trepidation. I’m in the best form of my life, and completed my first 50-mile ride for a decade last week. I’ve joined a club, the newly formed ‘Clwb Beicio Menai’ and have entered a few sportives – organised long distance rides with no race and no winner.

My first of these is on Tuesday. It’s a 66 mile route around Cheshire lanes called ‘Let them eat cake’. And on the weekend I’m riding the Wales Sportive in Tenby, an easier 40 mile route which I rode for fun a few weeks ago. I’ll be riding this on Transverse Myelitis Awareness Day instead of the over-ambitious planned trip to Cardiff. And by the time I attempt my local sportive in a fortnight, the 47 mile ‘Etape Eryri’ over familiar hills and mountains, I hope to be sitting atop my dream bike, a Bianchi Infinito which I ordered yesterday. I know it’s a lot of money, and I probably shouldn’t have, but trust me, life’s too short.

47-year old Welsh cyclist. I suffered a dual pulmonary embolism in March 2011, following an attack of transverse myelinitis in 1994. Apart from that, I'm fine. Author of Red Dragons: The Story of Welsh Football.
View all posts by 2clots →
This entry was posted in Uncategorized. Bookmark the permalink.